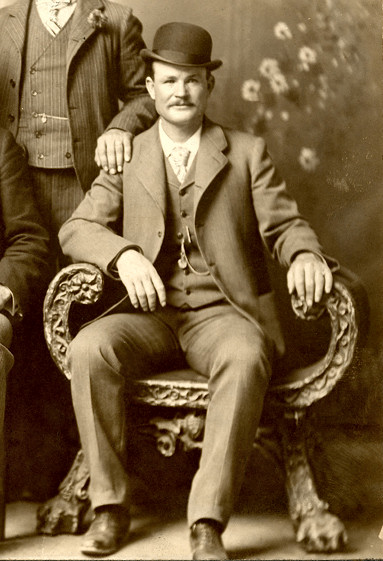 Circleville boasts of their famous (or infamous) Robert Leroy Parker, better known as Butch Cassidy, who spent his youth there during the 1870s and 1880s. His boyhood home still stands near U.S. Highway 89, two miles south of town. In the summer months it is open for visitors. Piute County is Butch Cassidy Country in more ways than one. Here he is thought of with a little more kindness and tolerance than one might expect. It was in Circleville that he grew up, and here that he learned how to change cattle brands and evade the law.

In the Globe newspaper, the following item was written and published on December 20, 1988. You can't believe the movies! Butch Cassidy died in bed. Romantic outlaw, Butch Cassidy, didn't die with his six guns blazing in a murderous shootout with soldiers in Bolivia, as many historians believe. He passed away peacefully in bed with his boots off. Cassidy's nephew, John Betenson, says his uncle and his fast-draw partner Harry Longabough, the Sundance Kid, spread the story about their deaths so that detectives, who were hot on their trail, would call off their manhunt.

"There was a battle with soldiers and two men did die that afternoon,” explains Betenson, a 68-year-old retired rancher in Circleville, Utah. “It was two lesser members of the outlaw gang who bit the dust. Butch and Sundance simply assumed their identities. The Bolivian soldiers who captured them were told they had killed the infamous train robbers, and the troopers were happy enough to believe it. The trick worked, and once the trail was cold, Butch and Sundance rode off in to the sunset and anonymous retirement. I know that's the chain of events,” says Betenson. “My mother, who died in 1980 at the age of 96, was Butch's sister, and he visited her in 1925, when I was just five years old. I remember that if the subject of my uncle came up at the dinner table, we were taught to act as if we had never heard of him. Of course, everybody around these parts knew he was my mother's brother.” True or false, the Bolivian shootout provided a rip-roaring finish to the smash-hit movie, “Butch Cassidy and the Sundance Kid,” which starred Paul Newman and Robert Redford. Betenson told Globe that Butch was using the alias William Phillips when he died of cancer in 1937. But he won't say where the outlaw is buried for fear that trophy hunters might try to unearth his remains. “My uncle's real name was Robert Leroy Parker,” he says. “An outlaw named Mike Cassidy took a liking to him when he was 16 and showed him how to shoot. He was so fond of Cassidy that he took his last name.” Betenson adds, “Butch told my mother he had run into the Sundance Kid, in Texas, a few years before, so we know both men escaped death in South America.”